Similar to the Willys Jeep in America, the early Patrols were available in civilian, municipal and military variants. In 1995 the 4W61 was release which featured similar styling but a more powerful 92 horse power engine. The 4W65 and 4W66 were released in 1958 and 1959 respectively and featured minor cosmetic, grille and badge changes as well as more powerful 125 hp 4.0L engines.

4W70 Carrier Wagon
The Nissan Patrol 4W70 carrier wagon was released alongside the 4W60 and was based on the Dodge M37 Power Wagon. Similar to the 4W60 series, the 4W70 was upgraded twice during the 1st generation with more powerful engines and cosmetic redesigns. 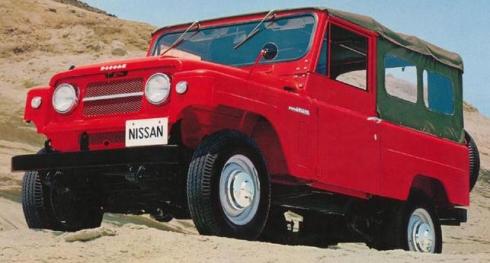 The 2nd generation Nissan Patrol 60 series is the most popular body style in the United States. This is chiefly because they were available as regular imports from 1962 to 1969. This is why the 1966 and 1969 model years are so popular in the US. Another reason they are very popular is because the style is very in line with the time for other 4X4 vehicles. In fact the front-end very closely resembles the classic Toyota FJ40 Land Cruiser. The Patrol 60 is very popular among off-road enthusiasts particularly because of its heritage as the first vehicle to drive across the Simpson Desert.

Jonga
The Jonga was a long running Indian Army and civilian vehicle that included the Nissan Patrol P60 and Carrier Wagon 4W73. Jonga stands for Jabalpur Ordinance aNd Guncarriage Assembly as many of the parts between the two vehicles were interchangeable. The Jonga was in service from 1969 all the way up until the late 1990s.

While not as popular in the US (as left hand drive versions are harder to come by), the modern Nissan Patrol 4X4 SUV is extremely popular in Australia and other international markets including, Japan, Spain, the Philippines, Iran and various parts of the middle east. Like most modern SUVs the Patrol has followed a similar body, technical and engine redesign pattern through the 80s, 90s and 2000s to get to its current design.

Third & Fourth Generation
The Nissan Patrol 160 series also known as the MQ and MK began in 1980 and replaced the 60 series. It closely resembled the Jeep Cherokee of the time and was available in a 3 door soft top/hard top, 5 door wagon/van as well as a pickup/fire truck. Although the updated 4th generation Y60 began production in 1987 the 160 series continued being produced until 1989 with the 260 series continuing until 2002 in markets such as Spain.

The fourth generation Patrol Y60 (GQ) was very different from previous models in that it featured a coil suspension, limited slip differential, disk brakes with some models equipped with a front mounted winch. This generation also saw the rebadged Patrol as the Ford Maverick, which was sold alongside the Nissan nameplate in Australia.

The 5th generation Patrol Y61 is, at the time of this writing, still currently in production in Australia, while it has been replaced by the 6th gen Y62 in other parts of the world. Like previous 80s and 90s Patrols, the 5th generation is known for its diesel and turbo diesel engine variants along with a more modern SUV look resembling that of the Nissan Pathfinder.

The current generation Patrol also known as the Royale in the Philippines and available as the Infiniti QS56 in North America (US, Canada, Mexico) and the Middle East was launched in 2010. This is a luxury model SUV with modern features such as variable 4X4 (sand, on road, rock, snow) and a 7 speed automatic transmission.

Find a Patrol For Sale

Use the search box above or the links below to navigate our USA Patrol Classifieds.  Use the link below to list your Nissan Patrol for sale.

Rather you are a buyer or seller and have found this site useful to you, please consider donating to help us provide a better user experience.